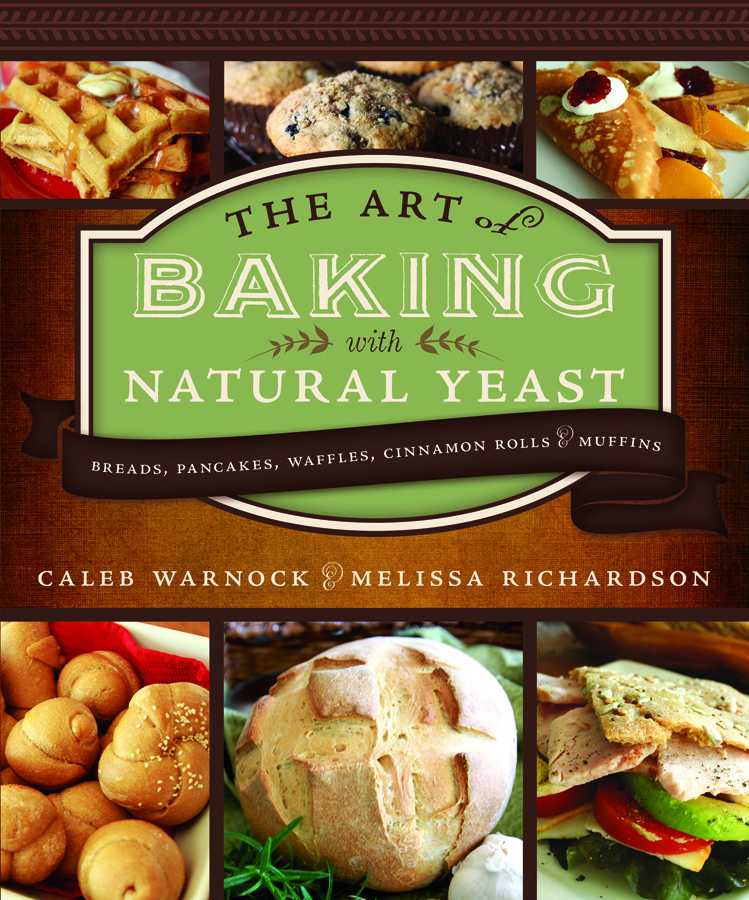 Book Review – The Art of Baking with Natural Yeast

I have recently read the book “The Art of baking with Natural Yeast,” by Caleb Warnock and Melissa Richardson.  10 years ago, I was asking myself “Why is milk, once one of the main staples of civilization, now condemned as “bad” by many medical professionals, including natural doctors who should know better? What has changed?” The answer to that question came pretty easily, since milk processing is pretty obvious. Milk, once straight from the cow/goat/etc. is now pasteurized, homogenized, and then even ultra pasteurized in some cases. Anyway, those same questions came to my mind about bread. Once considered the staff of life, now even whole wheat bread (which should be more healthy, because it is a whole food) causes a myriad of health issues, (sometimes even more so than white bread because of the use of rancid flour) and it is not so easy to see the answer. It can’t be easily explained by GMO or hybridization, because people with allergies to wheat or with gluten sensitivities often can’t even tolerate heirloom varieties of grains, even if they soak them and/or grind their own flour. So over the last while, I had been asking myself “What has changed?” This book has an answer to this question that actually makes sense.

The Authors assert that in 1984, all of the yeast produced by commercial industry went completely synthetic to accommodate industry and consumers who wanted quick rising yeast, and now many of the problems associated with bread and grains are actually a reaction to the synthetic yeast as well as the lack of soaking or pre-digesting more than it is a reaction to the grains themselves. I knew that un-soaked grains were a problem, but the issue of the synthetic yeast was new information for me. Natural yeast is made up of lactobactili and wild yeasts much like the bacteria found in kefir grains. (This makes it a probiotic strain of bacteria, and so it does not cause the same issues for people with candida and systemic yeast overgrowth.) When the yeast in breads changed, the sensitivities to wheat and gluten skyrocketed. Not to say their were not some problems before that point, but before that, these conditions were rare. Anyway, with natural yeast, the dough must have between 6 and 24 hours to properly rise, and during that time, natural yeast not only breaks down the phytic acid in the flour, but it also pre-digests the gluten without losing the elasticity of the dough. Quick rise synthetic yeast, which can rise in an hour or less does neither of these things. In the book the authors state that “several people with celiac disease have tried bread made with natural yeast and told us that they had no reaction to it.”

Another interesting study referred to in the book cites research done on natural yeast that found that people who ate a piece of bread made with natural yeast had a lower glycemic reaction to the carbohydrates in their food, even hours later. As it says in the book, “one woman in Pleasant Grove, Utah recently told us that her husband, who is severely diabetic, was able to eat bread for the first time in years with no glycemic spike when she began making bread for him with a start of natural yeast we gave her.”  This could explain the sharp increase in obesity and diabetes over the last 3 decades.

Also, bread made with natural yeast is actually a living food! How? Because the heat of baking stimulates the yeast to send out spores right before it dies, which can survive even the most uninhabitable environments. Once the temperature gets back to a safe level, the spores hatch and repopulate the yeast colony inside the bread. (something that I did not know before.) The co-author tells about how she discovered this with a great stoke of humor, and little things like this made the book a lot of fun to read 🙂 at the end of this section, she says, “So next time you take your Frankenbread out of the oven, you can hold it in the air and cackle, “It’s Alive! It’s Alive!” Or you can just eat it, but where’s the excitement in that?”

Another great point that the authors made was that bread was the STAFF of life, and not the CRUTCH of life, meaning that it was never the main part of the meal, and if you can’t have a meal without bread or grains, then you are relying on your staff way too much.  Caleb has a yeast starter that comes from a 100+ year old start of pioneer yeast, and he will send a start of this yeast for free to anyone who buys his book – all you have to do is send him a request with a self addressed stamped envelope. The yeast is an actual yeast start, and not a sourdough starter, and so it looks, tastes, and smells like yeast bread.

I hope that you all will find this as useful as I did! Not only was it very useful and enlightening, it was a fun read.